In the last post I refactored code around representing measures as structs, rather than anonymous tuples. That version of the code is on Github here.

The goal of that refactor was to clean up the code base, not to make any changes to the resulting output, but I did end up making one small change. In Measure.events_to_lily/ I added a call to Measure.add_beaming/1

All this does is insert [ as the second element of the events list, and ] as the last element. When this is compiled by LilyPond, this ensures that all the notes in a measure will be beamed together. To illustrate, this is the difference between

which I think looks rather nicer.

However, on a less aesthetic note, this is also the difference between

Clearly the beaming doesn’t work as well here. But more importantly, in both cases we should be able to display a full measure rest, instead of a tuplet made of up individual rests.

This is a small change in the Elixir code. We can add a function to check whether every event in a measure is a rest (all_rests?/1), and then case on the value of that function call to either print the events as usual, or use LilyPond’s full measure rest syntax to print out the appropriate rest symbol for the measure.

This gives us the much more preferable

So far every printed note has been an 8th note. While this works for getting the basic layout of the piece set, it’s hardly ideal for a final printed score. Let’s look at the opening measure 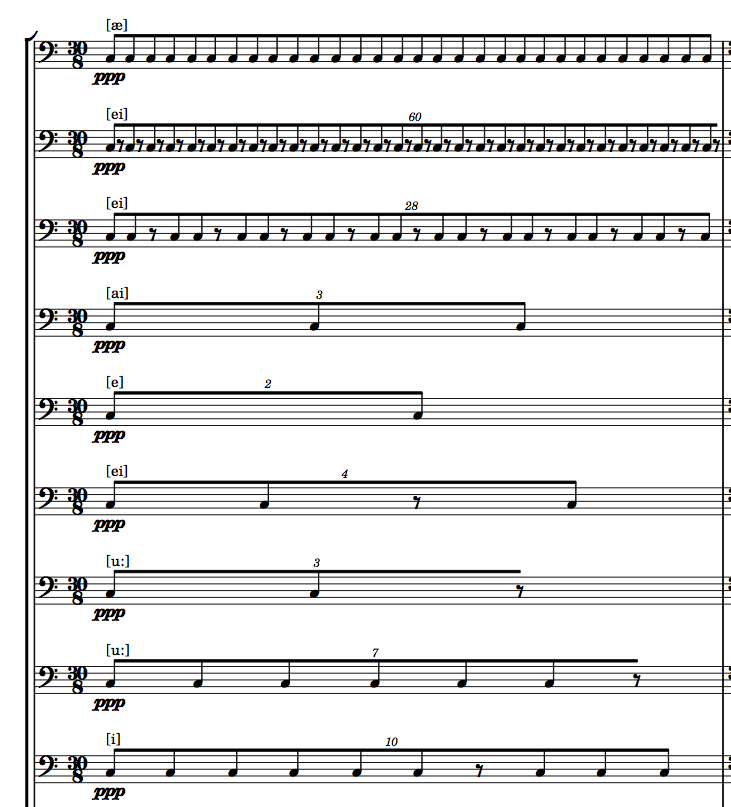 There are two issues it would behoove us to solve here:

Issue 2 is slightly easier to work out, and helps us on our way to solving issue 1, so we’ll start there:

When notating tuplets in music, and even more commonly now as rhythms in contemporary music become more complex, there is some flexibility. For example, dividing a quarter note beat into quintuplets: should they be notated as 5 sped up 16th notes, or 5 slowed down 32 notes? In almost all cases, composers and performers would prefer the 16th notes, but the possibilty of alternate notations does remain.

To eliminate some of the subjectivity, or, rather, to render my general subjectivity into code, I’m going to say that, for each tuplet, we will

Addendum: if x would round to 0, the ratio is greater than 2:1, in which case we should use 16th notes against 8th notes

Given the ratio 7:30, we want to find the untied musical duration that best fits into 30 seven times.

Here we find the ratio for the tuplet, and based on our decisions above, pick the most appropriate untied duration. If the time signature is set instead of the tuplet – indicating the pulse part – we return “8”. I’ve also added the :written_duration attribute to the Measure struct, and we store this duration in that attribute to make it more easily accessible.

Now we need to update Measure.to_lily/1 to make sure we use this new duration: 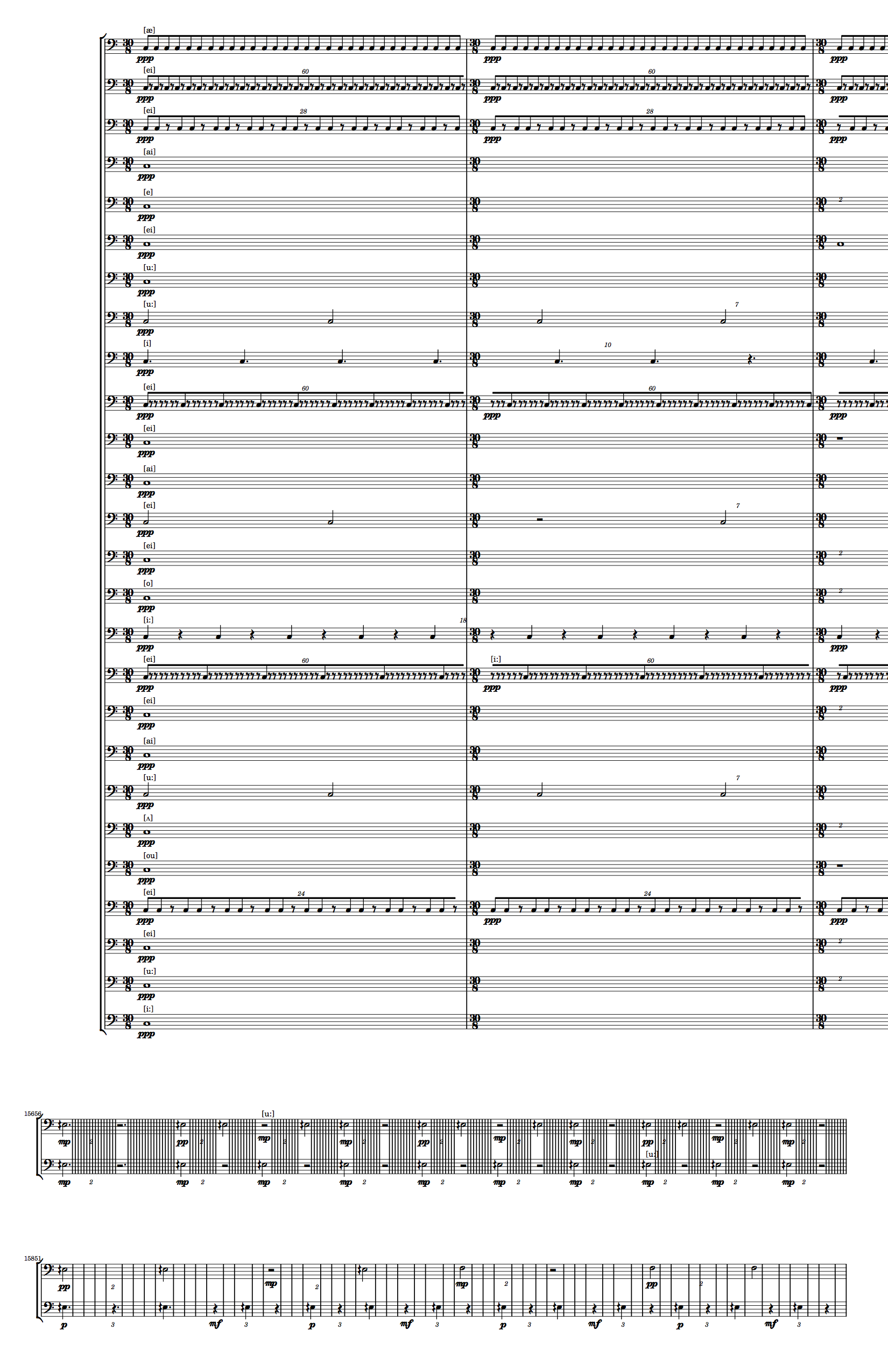 Huh. Well, I won’t pretend I don’t think that looks pretty cool. But, it’s not really what we’re going for, so let’s figure out what went wrong.

Turns out it’s not too difficult to suss out the issue. Let’s take a closer look at the 8th and 9th staves:

Fortunately, this is simple to fix. Based on the division and rounding done in set_proper_duration/1 above, we know how many 8th notes are in each new notated tuplet event, so all we have to do is multiply the numerator of the tuplet by that number. For example: 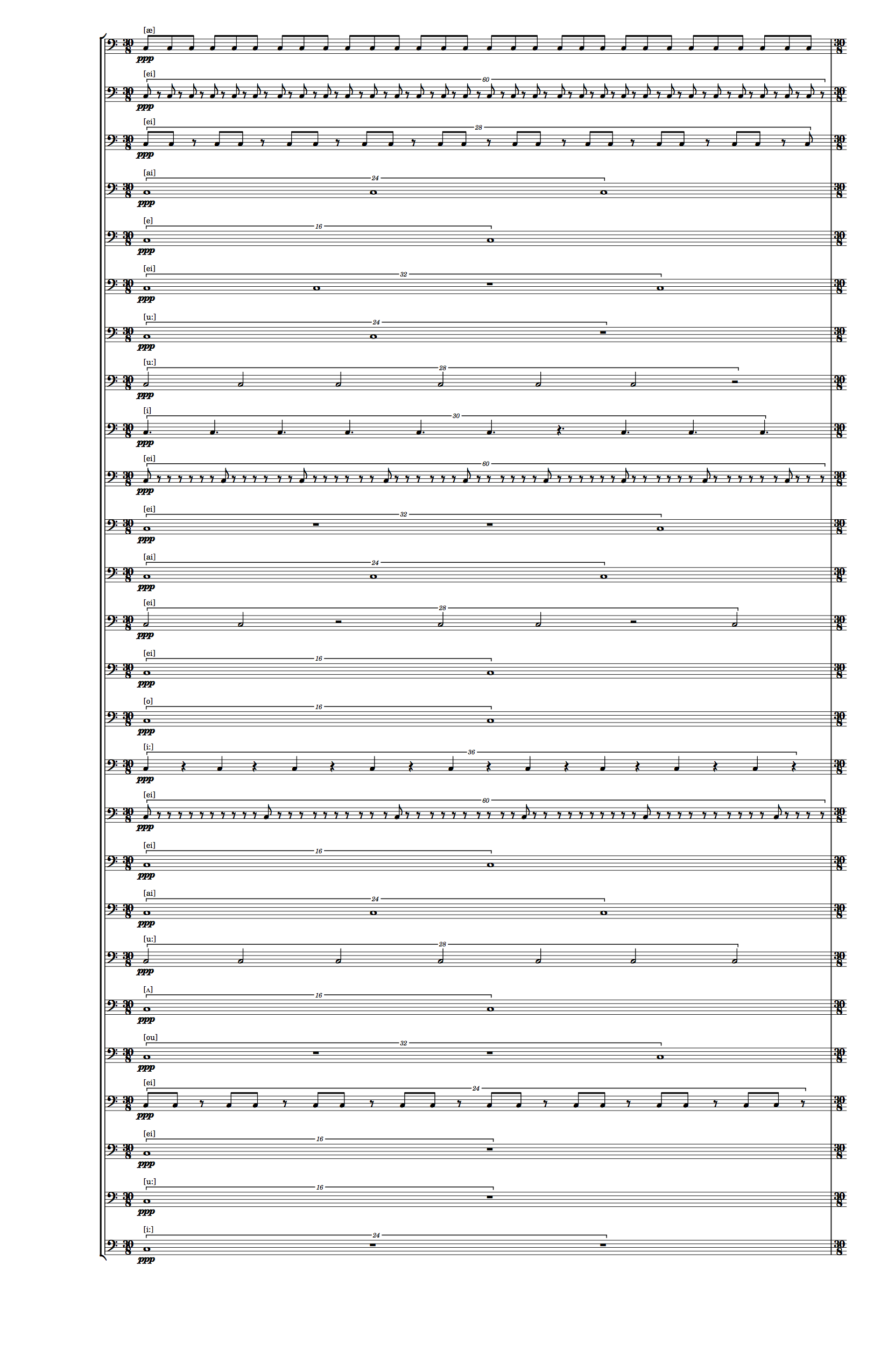 There we go! Except that some of those 8th notes really should be 16th notes, but they’re not. And that’s because my math is bad. When rounding, I said that a rounded value of 0 should return 16th notes, but 8/16 is exactly 0.5, which gets rounded up to 1, which means we stay using 8th notes.

With just a couple of small code changes, to account for being able to map to 16th notes, and to round the tuplet numerator properly: 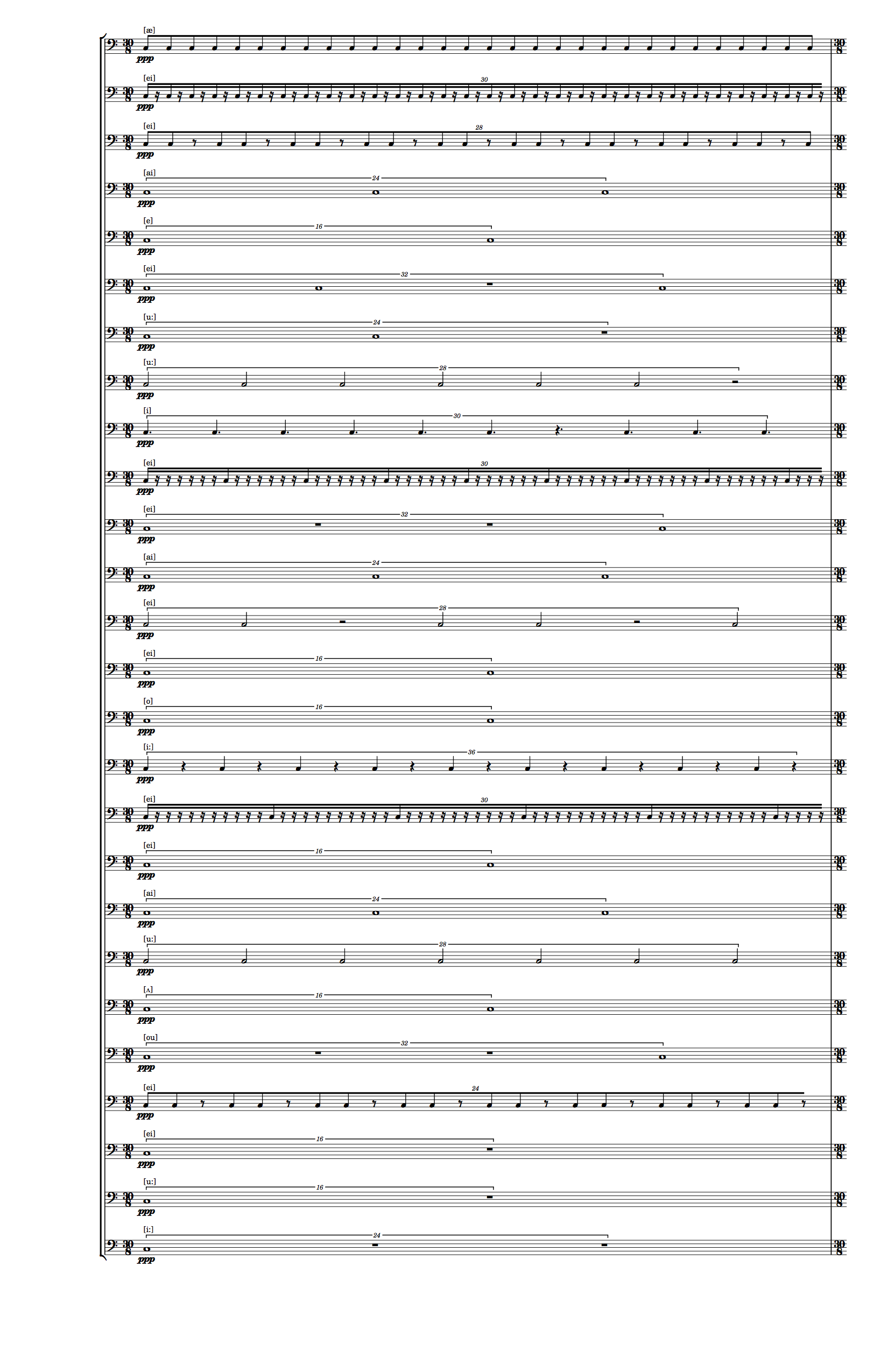 Great! There’s only one more thing that stands out as affecting the readability of the score, and that’s the text of the tuplets. In the fourth staff, we have a tuplet of 24:30, but it is notated with 3 whole notes. As calculated above, the tuplet ratio is between 8th notes on both sides, but when the notation uses whole notes, 24 is less descriptive than we might like. Fortunately, LilyPond lets us put just about anything we want in the tuplet text, so let’s go ahead and do that.

I also took this chance to address issue #1 from a ways back in this post: find measures in which the tuplet divides evenly into the measure and “detupletify” In those cases, we can print the proper generated duration without needing the tuplet markup, as you can see in the score below in the second and ninth staves. 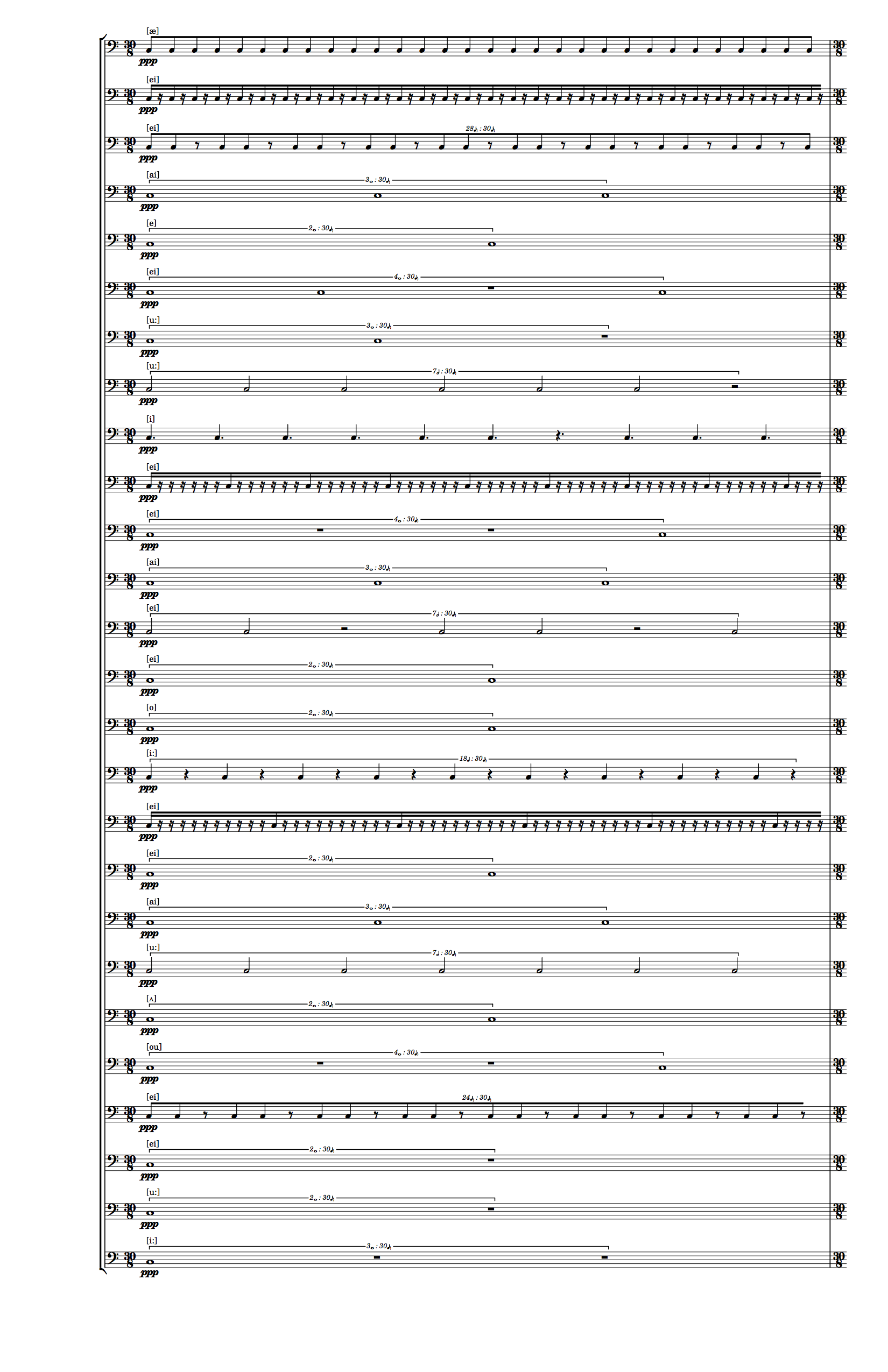 The changes here are even more apparent on the last page of the score, where several measures of 4:2 tuplets have been renotated as 4 untupletd 16th notes: 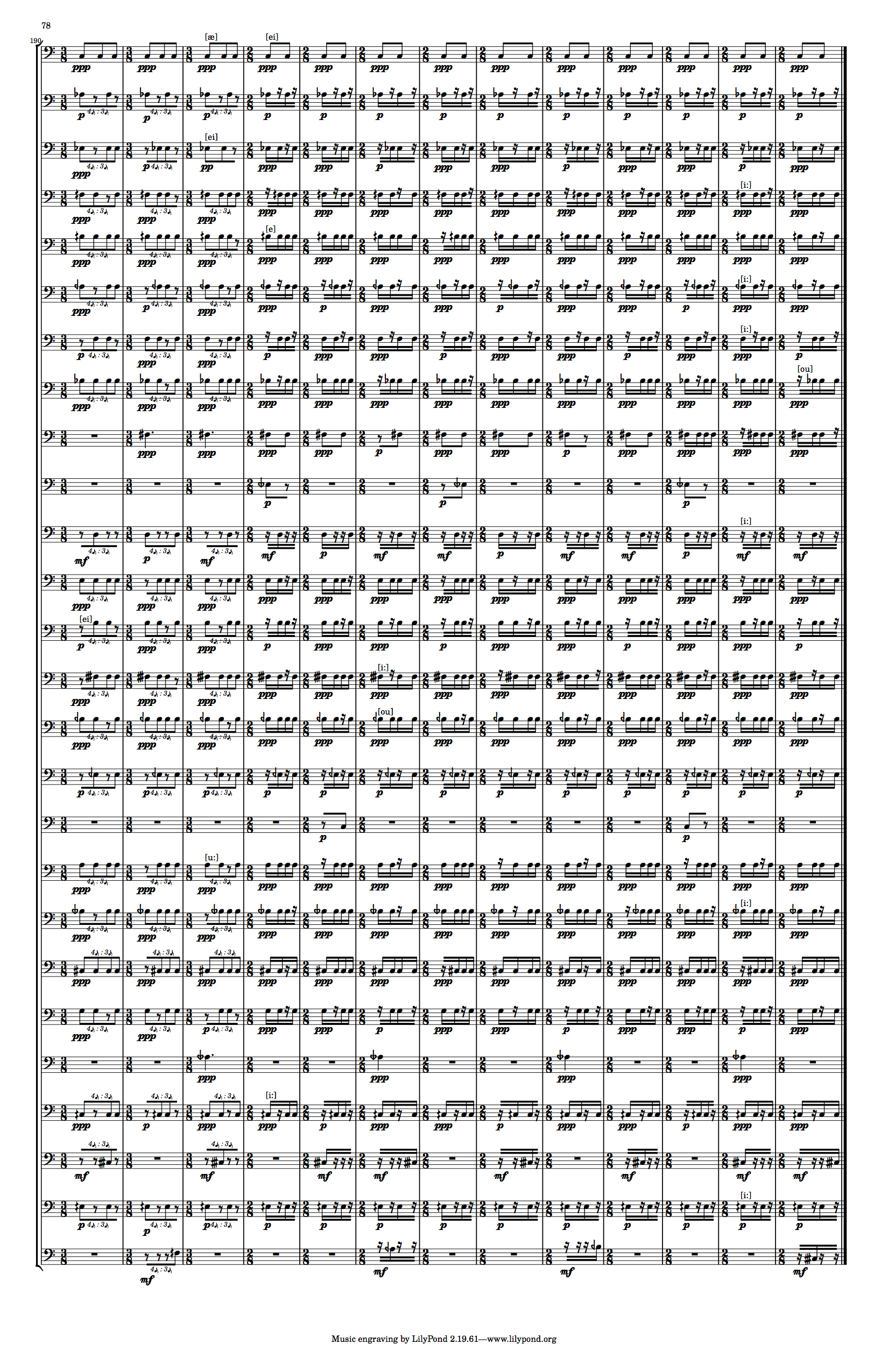 I think that’s enough for one post, but here’s a list of what I want to tackle next time:

The code, as it exists by the end of this post, can be found on Github here.