So now that we have a our coordinate sets in JSON, we can start trying to shape them into music.

My original idea was that one letter would serve as a pulse, providing a steady beat, while the rest of the letter parts would modulate their rhythm around that letter, so I decided to start down that road and see where it took me.

For music notation, I love LilyPond. LilyPond, like TeX, is a typesetting system that that lets you write your music in a plain text file and output it to high quality graphic files. It’s especially ideal for this project because it’s trivial to generate LilyPond code in Elixir and write it to a .ly file. So with our tools picked out, let’s go.

The simplest form of this idea is to create a musical measure for each point on the graph’s X axis, and for each letter part take the letter’s graph’s Y value. The time signature of the measure will have a beat count equal to the Y value for the pulse letter, and every other part will be a tuplet of letter_Y beats in the space of pulse_Y beats.

The Elixir code for this is similarly simple

Some visual examples might be in order. Using a as the pulse letter, the generated LilyPond code looks like

Compiling all of this to a score, we see the first page (click on the score to zoom in): 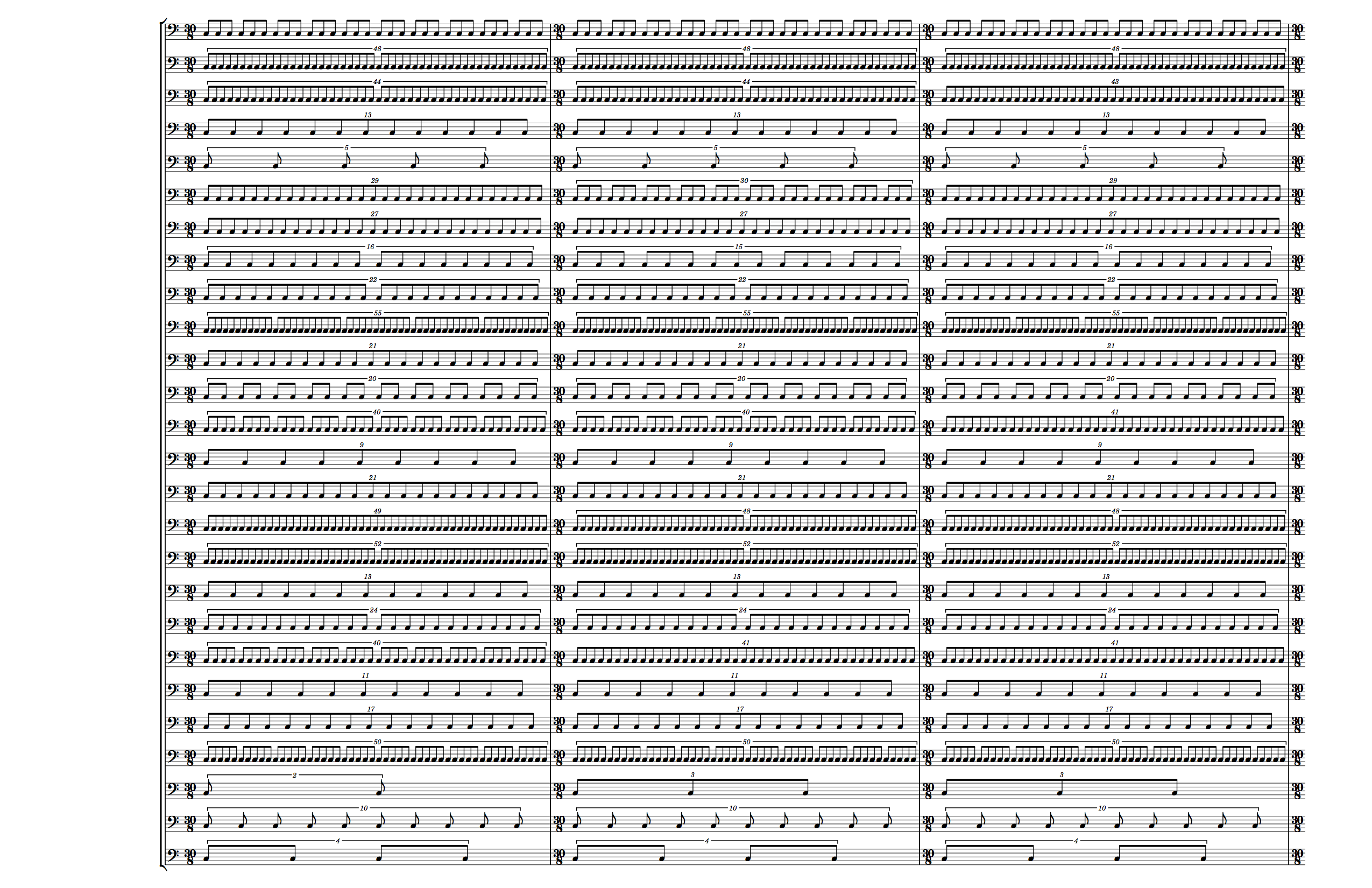 Ok, this isn’t too bad, given the idea. The shifting polyrhythms are definitely there. There are some pretty big tuplets there too, but if the pulse (the top line of the score, these are displayed alphabetically) is reasonable enough, they’re not physically impossible for a singer to produce.

But, if we look at the last page:

Again, our pulse is at the top, and now the biggest tuplet is 2 pulse (“a”) beats to 52 “y” beats (second staff from the bottom). If we want to keep the pulse steady throughout the whole piece, either these last measures are absolutely impossible for any non-electronic instruments to produce, or the opening measures are almost unbearably slow. So I think we need to finesse this approach a bit.

(As an aside: I may well use this formulation to create an electronic/MIDI-based composition, where human physiology isn’t a limiting factor, but for now I’m really interested in this being a human-performable vocal piece, so I’m moving on)

For this version I wanted to try to reduce the range of tuplet ratios in order to increase the performability of the piece. To that end, I added code that took the coordinates for a letter’s graph, found the maximum Y value, and divided each point by that value, resulting in a set of ratios between 0 and 1.0

I decided for this version, since we’re using the ratios, rather than the raw Y values, to make the pulse a steady, unchanging 16th note pulse.

I decided for this version, since we’re using the ratios, rather than the raw Y values, to make the pulse a steady, unchanging 16th note pulse. Given that, each of the ratios calculated above is multiplied by 16, and then rounded to an integer to generate the numerator for the tuplet.

Below is the full, annotated Elixir code for generating these musical parts:

And the first page: 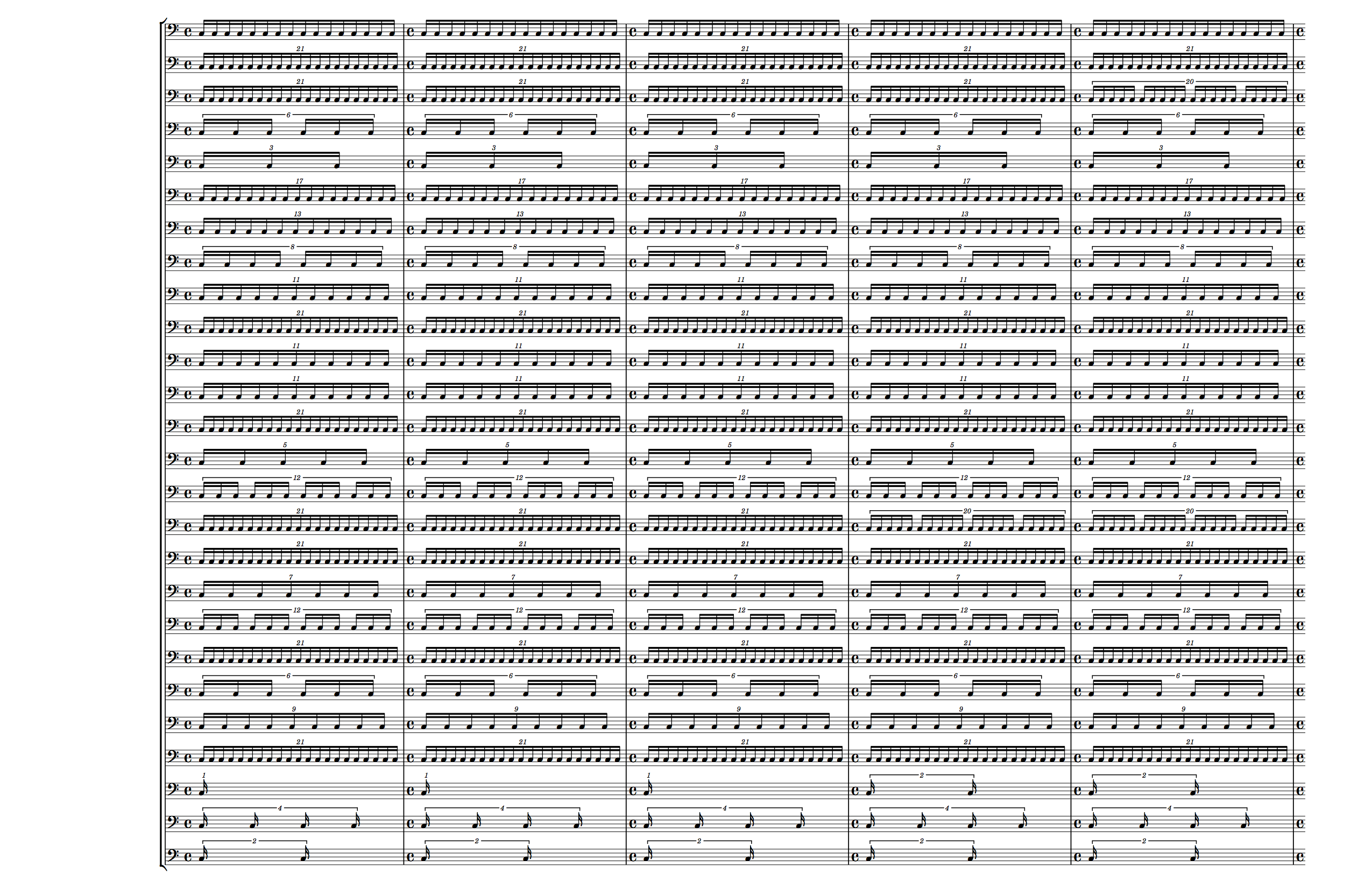 Ok! That looks reasonable. But we ran into trouble by the last page, so let’s take a look at that too and see if we did any better?

Ok, no, that’s even worse. If you open the full size image, you can see we have many ratios of 200+:16, so that a single measure won’t even fit on the page. So clearly there’s more work to be done on reining in these ratios.

Fortunately, Processing has the function map(), which takes a value, a range currently containing that value, and a range into which to map the original value.

Even more fortunately, a quick search through the Processing source code shows that the implementation is, error handling aside, one line of arithmetic, and thus easily copyable over to Elixir:

This means there’s really one only step we need to add to the previous implementation, and that is to take the ratios for a graph, find the min and max ratios, and map the whole range to a performable range of tuplets. Since our pulse is 16th notes, I decided the lowest ratio should be 1/16, or one note per measure, and I set the highest ratio to be 2, which is fast to articulate, but definitely possible.

This is a simple change to code

And the resulting first and last pages: 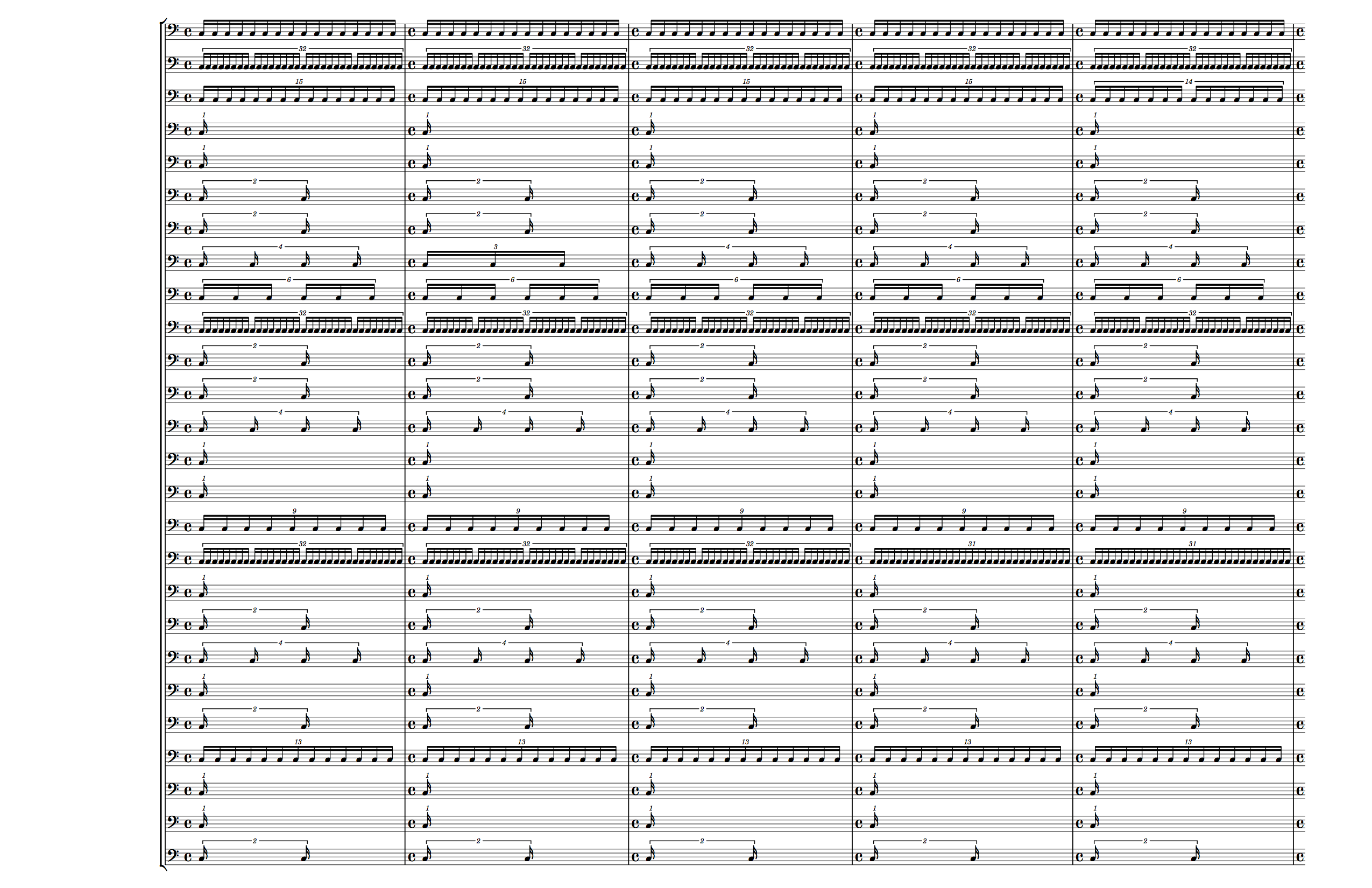 Well hey, doesn’t that look (theoretically) singable by humans! This could work, but now that we’ve got the ratios working, I want to try one more variation.

Looking at the score above, every part articulates on the downbeat of each measure, which would create a macro pulse throughout the entire piece.

What if we combine the calculated rations from V3 with the structure from V1 and V2, where the length of each measure is the absolute Y value for the pulse? 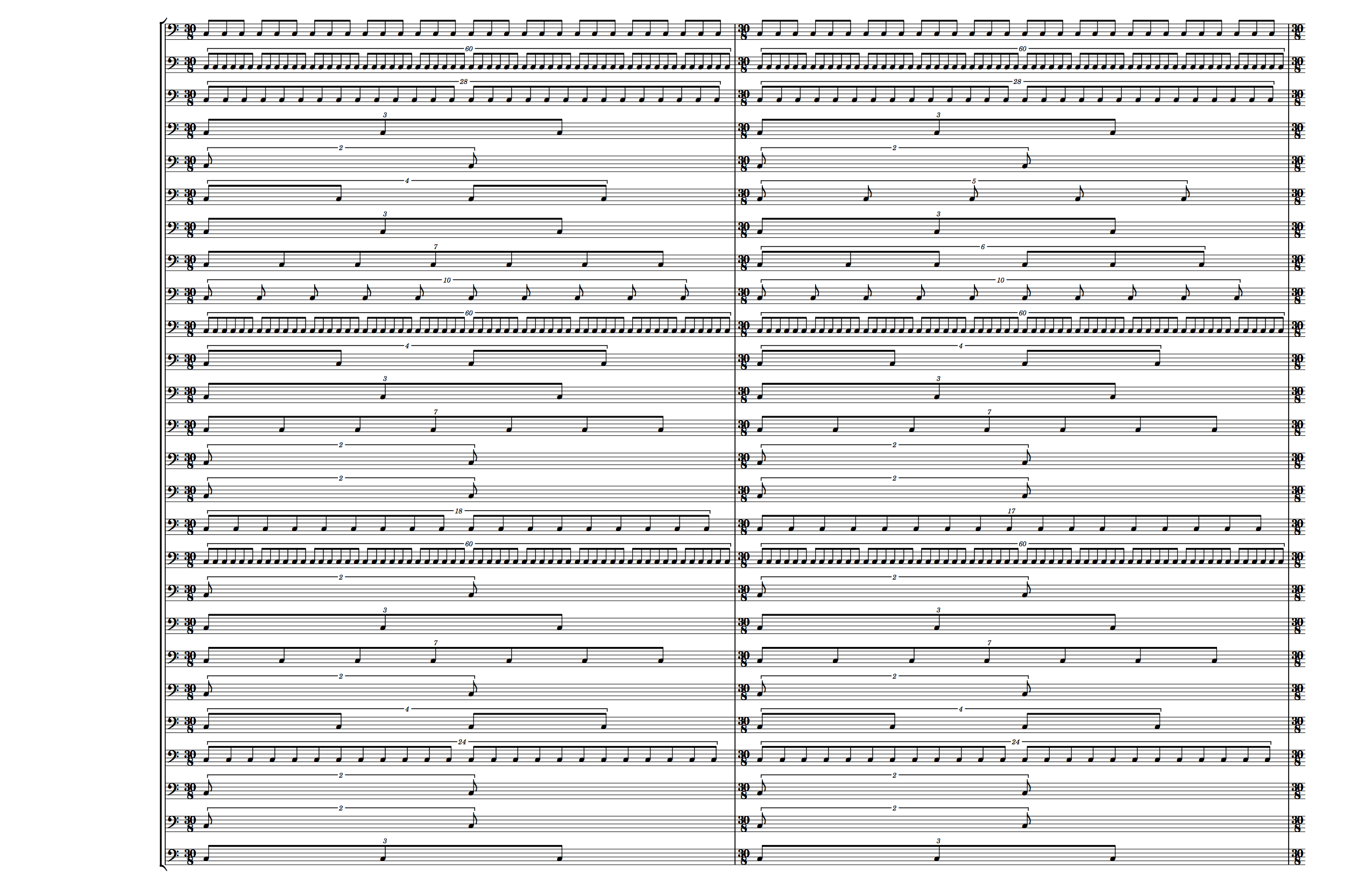 While this version begins with a similarly open set of ratios, the ending is very different, much more intense as the measures get shorter and the downbeats closer together.

At this point we’re down to aesthetics when it comes to whether to move forward with V3 or V4. For now, I’m going to go with V4, since I like the variation in measure length.

Now that we’ve got a basic rhythmic document laid out, the next steps are to turn it into something a bit more compelling musically. Stay tuned!